Chapter 883** Title: Snack Time
Summary
Title: Snack Time/Tea Time
Cover page is of Ideo and his alliance destroying both the ships that were fighting in the last chapter.
Luffy tries goes into Gear 4th
Katakuri defeats Luffy easily with his awakening.
Crushes Luffy with the walls (now mochi) from the Mirror World
Katakuri talks about his snack time being delayed
He makes a house/temple out of mochi to eat his snacks in
A really fat luffy breaks through the mochi wall that was on him by eating through it.
He finds katakuri with his CoO
Luffy breaks through the Mochi house to find katakuri eating. katakuri’s mouth is revealed. He has long fangs for teeth.
Katakuri is revealed to be a glutton for sweets and not “dignified” at all
Katakuri is mad that his appearance got discovered
The chefs who saw it get’s cut down by katakuri
[Luffy vs Katakuri round two…fight!]
Luffy manages to kick Katakuri, notes that he couldnt dodge it.
Luffy uses Kong Gun against Katakuri
End. 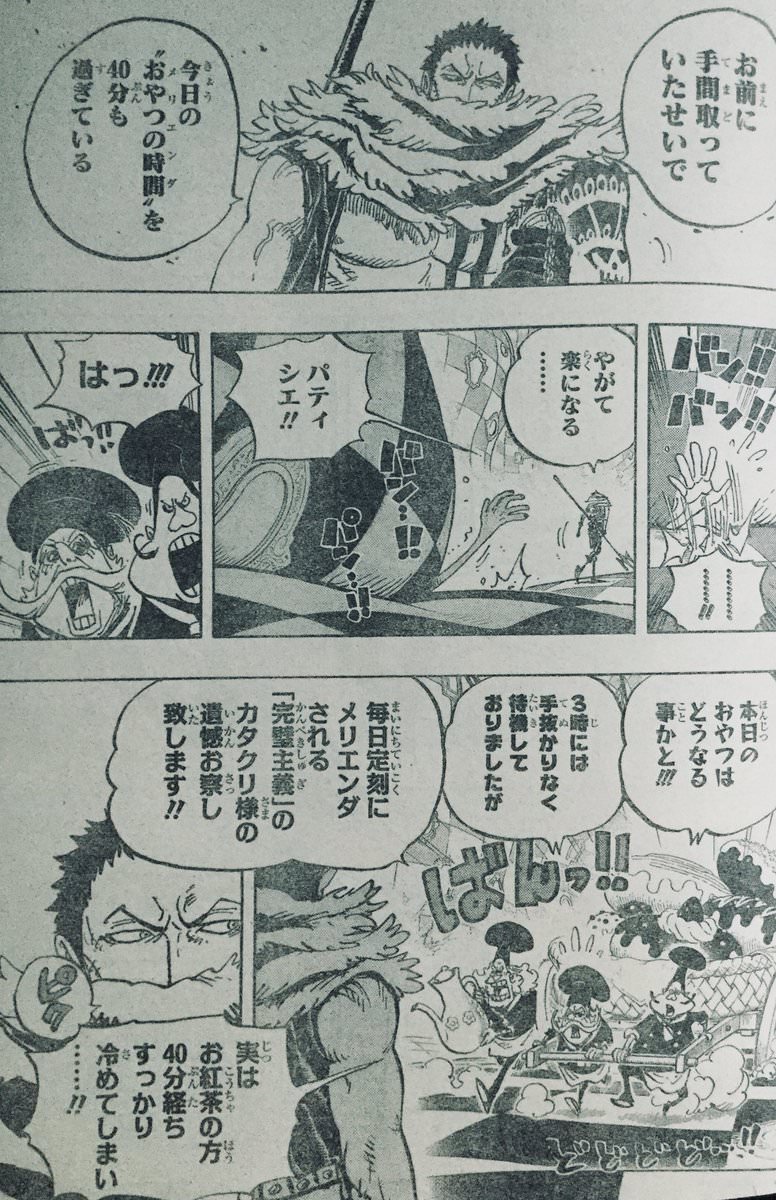 Translation of the page:
because you’ve taken me more time than expected…
today’s Tea Time has been delayed by 40 minutes.
…!!
don’t worry, you’ll be at ease soon…
Pattisier!!
yes sir!!!
we were wondering what to do about today’s tea and snacks!!!
We’ve been waiting on standby since 3pm…
we’re sorry, master katakuri “the perfectionist”! You weren’t able to have the Merenda (a light meal in southern europe) that you’ve always had at the exact same time every day.
the truth is, because of the 40 minute delay, the black tea has completely cooled down…!!