Mjosgard promises to stay by Shirahoshi's side during the conference and to take full responsibility if any fights happen.

Pell comes running to Vivi and apologizes for not being with her.

The Queen of the Sorube Kingdom, Conney, arrives at the Celestial Dragon door at Pangaea Castle where she is stopped from entering.

Roswald arrives in order to attend to urgent business after Charlos returned and informed him of the incident.

Roswald is riding on Kuma, the present Shichibukai, former Revolutionary Army commander, and former King of the Sorube Kingdom. Kuma is rented out as an unrivaled slave.

The gates are opened for Charlos, which is used by Conney, who is really Bonney, to infiltrate in.

She resolves reaching her target after seeing Kuma's tragic state.

They act to not leave with out rescuing Kuma, who was made an example of due to being a former member nation's king.

And then the day of Reverie.

The Five Elders are suspicious of Cobra, who inquired for an audience, and think that a one great purge is needed if the long-lasting balance of the world can not be protected.

A mysterious person tears up the bounty posters of Luffy and Blackbeard, pierces a picture of Shirahoshi with a sword, and gazes wonderingly at a picture of Vivi.

This person sits in the Empty Throne and is called Imu-sama by the Five Elders.

The Five Elders wish to learn if there is a light that Imu would like erased from history.

One Piece will be on break next week. 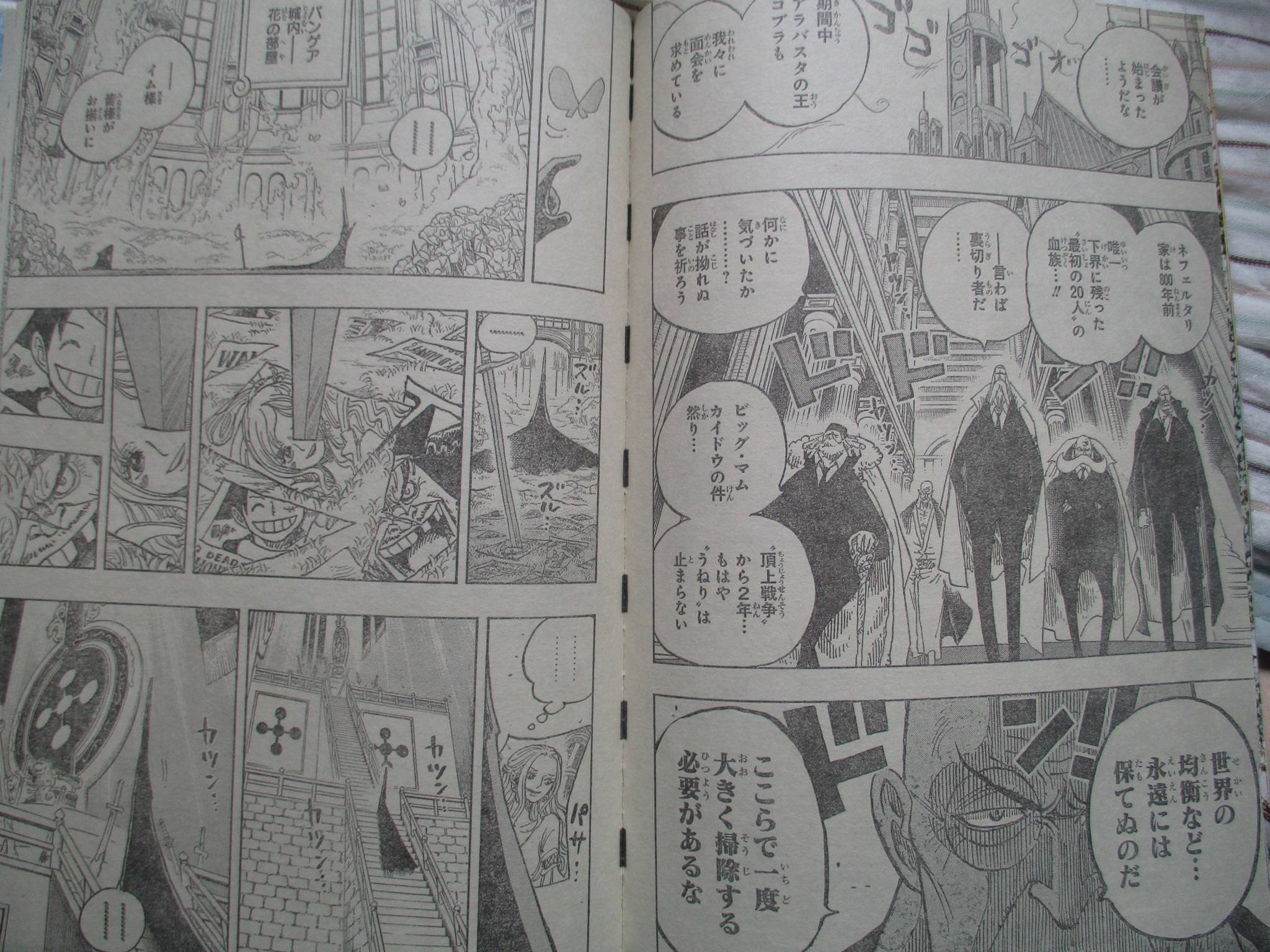 Gorosei 1: It seems the conference has begun. The king of Alabasta, Cobra has requested a meeting with us.
Gorosei 2: The Nefertari family decided to remain in the lower world 800 years ago. But their bloodline is that of the First 20 Families.
Gorosei 3: In other words, they are traitors.
Gorosei 4: Has he realised something? Let's hope he doesn't complicate matters.
Gorosei 5: Big Mom and Kaido (illegible) It's been 2 years since the Summit War and yet the waves are still unstoppable.
Gorosei w/ glasses: We cannot protect the balance of the world forever. So now it seems we must conduct one big purge.
Kneeling person: Im-sama...

?: Calm down Sabo!
S: is that all a comrade means to you!? That kind hearted Kuma!!
Morley: I understand how you feel. I feel the same. Kuma san can’t be left like that. That’s why we came here.
K: But even if we release him, he won’t be as he was before.
M: But to let Kuma chan’s life be a sacrifice to the WG is!
L: He’s formerly a king of an affiliated country so they’re showing him off.
S: We won’t fail. We’ll succeed... or die. 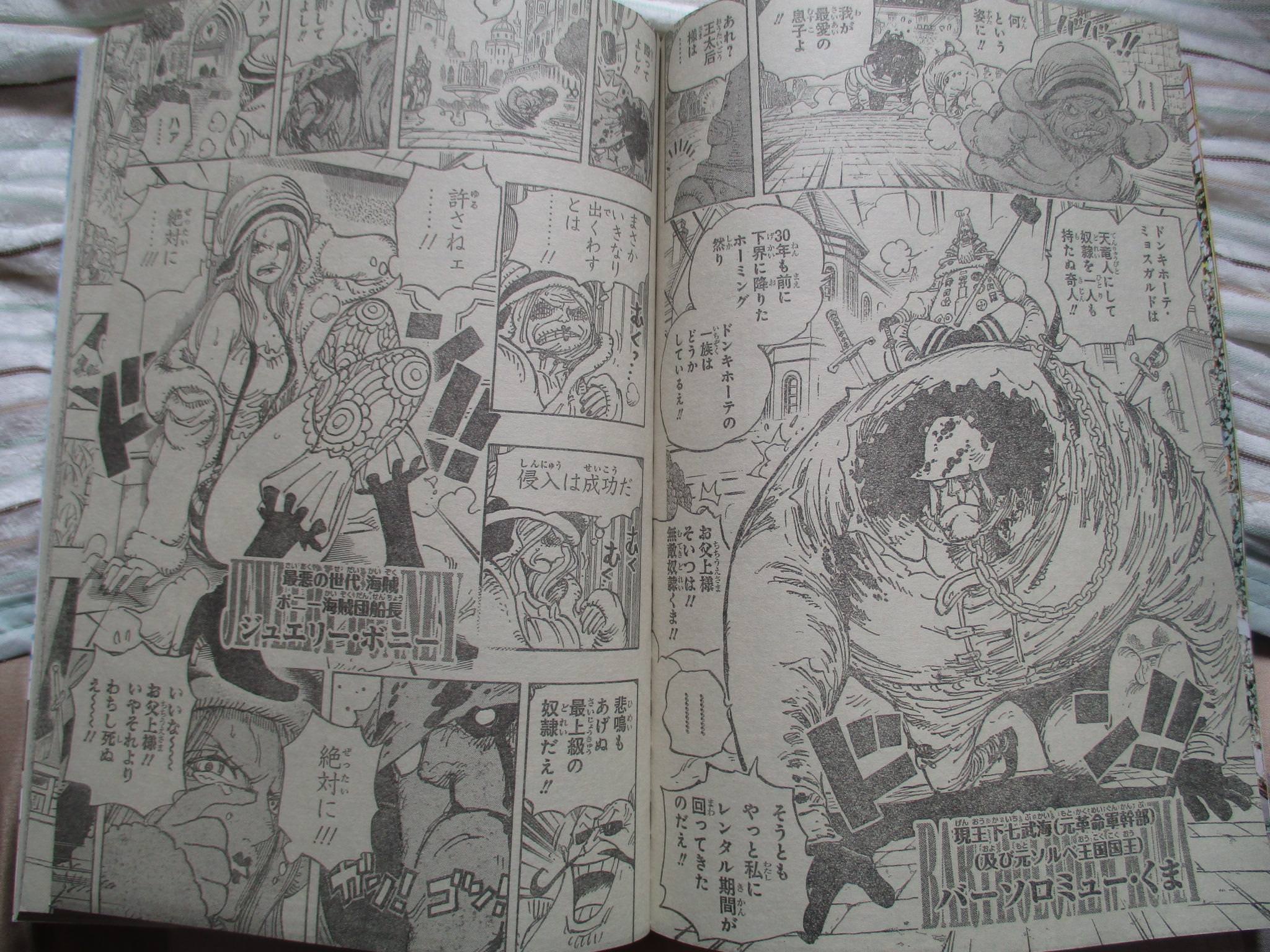 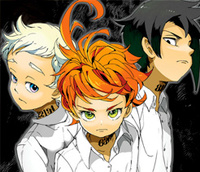